Our BRÚ Stout features Brian Boru, High King of Ireland who was the greatest Irish military leader. Unlike the Celtic myths represented across our core range, Brian Boru was a historical figure. He was a real king, reigning in Ireland from 1002 to 1014. 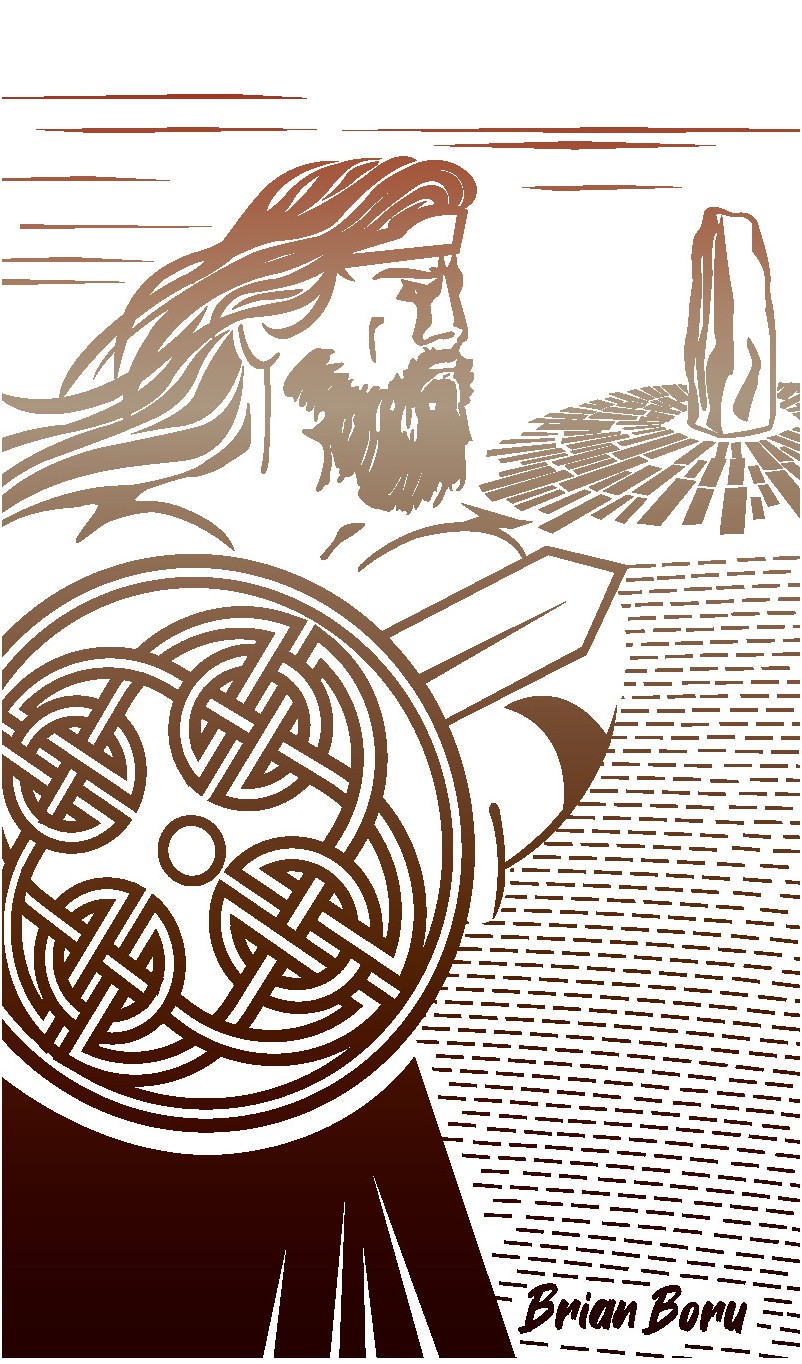 Celtic Ireland had more than a hundred kingdoms and sub-kingdoms, with the five major ones being: Ulster, Meath, Connaught, Leinster and Munster. Brian Boru is considered the greatest of the Irish kings because he unified the leaders of these kingdoms to fight off the Danish Viking occupation, securing Ireland’s freedom.

Brian Mac Cennétig, born around 941in Munster, was the son of a sub-king called Cennetig. Later, he was called ‘Brian of the Tributes’ (Brian Boru) because he collected tributes (money and valuables) from the leaders of Ireland’s minor kingdoms. With the funds collected, he rebuilt the libraries and monasteries that were destroyed during the Viking invasions.

After his father’s death, his brother Mahon became King of Munster in 951. They fought together against the invading Norsemen until Mahon was murdered in 975, making Brian the king of Munster. As revenge, Brian killed his brother´s murderer, the King of the Ostermen of Limerick, King Ím. Shannon River, which separated the provinces of Meath and Connacht, was used by Brian as an attack route for his naval forces to reach the shores of either province.

In 1002, Brian demanded that Uí Néill king, Máel Sechnaill, acknowledge him as King of Ireland. After taking a month to consider this, Máel agreed because his own people would proclaim Brian as the hero of Ireland anyway.

The Norsemen came back in 1014 and once more fought Brian Boru and his army at Clontarf in Dublin. Although he didn’t have the support of the Connaught kingdom, in 1022 the Munstermen won the battle. However, this victory was at the expense of the last great High King of Ireland’s life. Brian Boru’s body was brought to Armagh, in the monastery of St. Columcille, due to his generous support of the Irish church and for donating 22 ounces of gold to this monastery and declaring Armagh the religious capital of Ireland. Brian´s name is inscribed in The Book of Armagh, preserved in Trinity College library.

Brian Boru became an important symbol in Ireland because of his popularity and strength. His name is present in James Joyce’s Finnegans Wake; in the Disney film Darby O´Gill and the Little People, where he is the Leprechaun king; and he is referred to in many names of Gaelic Athletic Association clubs. The O’Brien surname refers to descendants of Brian, with them being called “the Uí Brain” (“O” or “Uí” means grandson or descendant).

While our BRÚ Stout is fit for a king, everyone is welcome to enjoy it (whether they’re an O’Brien or not!).