Our Pale Ale pays tribute to the free spirit of Boann, Irish goddess of the River Boyne. She is associated with water, fertility, inspiration, knowledge, creativity, music, poetry and spiritual insight. According to myth, she sacrificed herself to form the river Boyne and she brings fertility to the Irish lands. We have incorporated green into our Pale Ale label design to represent fertility and wealth.

Boann lived at Brug (or Brú) na Bóinne, name of the ancient Gaelic site widely known as Newgrange in County Meath and dated at around 3,000 BC (older than the Egyptian pyramids). In addition to her association with fertility, water and creativity, her connection with the Meath area and Brú na Boínne makes her the ideal symbol for our Pale Ale. 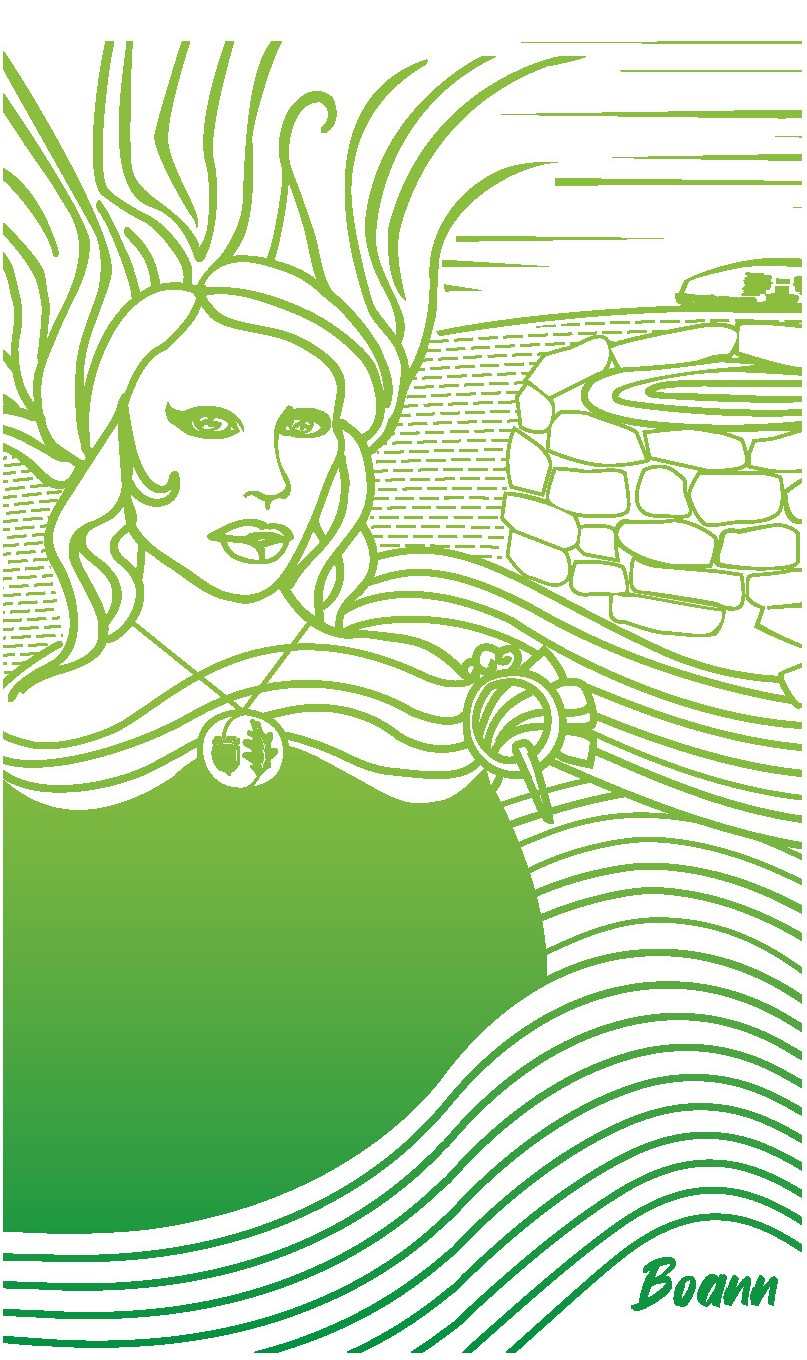 Boann (Boand or Boinn) was a Celtic goddess from the Tuatha de Dannan (People of the mother goddess, mentioned in a previous blog about Danu). She lived on Brug na Bóine, where visitors would travel to inspire creativity and spiritual insight from Boann and the magic said to exist in the surrounding area. The name “Boann” means “woman of white cows” or “shining cow” in Gaelic, symbolising wealth, power and fertility. Cows were sacred and associated with water in ancient cultures, where milk and water were considered fundamental to life.

The stories about Boann give conflicting information about some details, including the identity of her husband, but her love for the Dagda is certain. Her free spirit drove her into the arms of the Good God (the Dagda, symbol of our BRÚ Lager). They had an affair and, to conceal their forbidden child Aengus (god of poetry), the Dagda froze time by stopping the falling and rising of the sun for nine months.

The story of her death and the formation of the River Boyne also varies between stories. The source of the river is said to be the Well of Segais. The Celtics believe that this well, where salmon swam, was surrounded by nine hazelnut trees. Those who ate the sacred nuts would acquire knowledge of everything (salmon and hazelnuts are symbols of wisdom).

Boann went to the Well of Segais and challenged the power of the well by walking counter-clockwise around it, causing a forceful spray of water to come over her. Some accounts say that the water chased her to the sea and the violent water took her arm, leg, an eye and then her life. Others say she was maimed and drowned, or that she was transformed into a salmon.

Finally, some sources believe that she went to the well to wash and hide her infidelity with the Dagda, where she then drowned. Although the details vary, all of the stories agree that Boann ultimately became the river Boyne, which starts in Northern Ireland and flows across County Leinster.

Boann was a goddess who was able to purge negativity from the mind as the flowing waters clear its path and to provide divine inspiration. If somebody drank River Boyne´s waters in June, it is said they would become a poet. Boann is associated with other famous rivers around the world including the Tiber, Jordan, Tigris and Severn. In Montenegro, the town Boan might be named after her, considering that Celts inhabited the area in the past.

Her story and her significance in Irish mythology made her the natural choice to be represented on our core BRÚ Core Pale Ale bottle. And with a few sips, we think that you’ll be inspired.